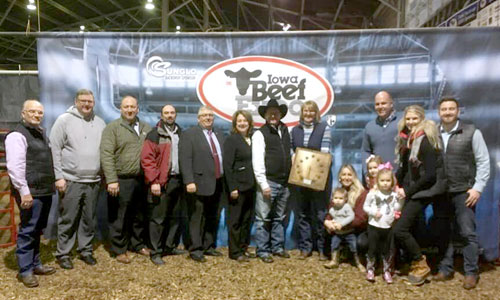 Tom Rooney Named 2019 Friend of Iowa Beef Expo
Information for the report was taken from an article in the January 2019 Iowa Cattleman magazine.

He was a prominent Limousin consignor at the Iowa Beef Expo for many years, and now spends his time on the other side of the ring as part of the dedicated ring staff helping other breeders and buyers at the sales.

After graduating from Bondurant-Farrar High School, Tom attended South Dakota State University (SDSU). During his time at SDSU, he was introduced to the Limousin breed of cattle. In 1976, Tom and his dad purchased two heifers from the Dudley and Thompson herd in Hampton, Iowa.

Tom started bringing cattle to the Iowa Beef Expo in 1978 and continued to consign cattle each year thru 2012, a 35-year span.

For the past 21 years, Tom has served the Midwest cattle industry as a sales representative for the Midwest Marketer. He travels many miles working the ring for production and consignment sales.

Tom, representing the third generation of cattle producers, and his wife, Stacey, reside on the family farm near Maxwell, Iowa. They have two daughters, Shelley and Trisha, and a son, Todd, and three grandchildren.