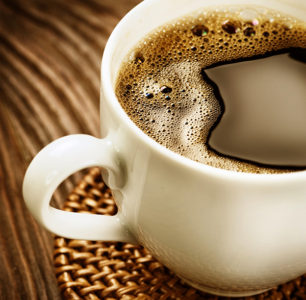 Missouri Limousin Breeders welcomed the Limousin family to Springfield, Missouri, last week and ‘A League Of Their Own’ became reality as families from across the country gathered at the Ozark Empire Fairgrounds for the Annual National Junior Limousin Show & Congress and All-American Limousin Futurity. Missouri summer weather was on hand, but the large crowd was treated to a full schedule of junior events and shows. While the results will be reported in various parts of L365, we thought we should report some of our observations that may not appear in the “Official Prizes” categories.

The furthest distance traveled, not only this week but through the years, has to go to junior show stalwarts, the Berry’s of Port Orchard, Washington. For years it was father Dave and son, Jeff, but that torch is now carried by grandpa Dave, father Jeff and son Rowdy. Lots of families are on their third generation of representation, but we personally think the Berry’s annual trip from Washington wins the prize for outstanding AAA planning.  Congratulations to the Berry’s, we recognize your sacrifice.

This year’s show also marked another passing of a more somber variety, as it was possibly the first Futurity EVER without longtime Missouri breeder and many-time Futurity winner Bob Wies of Wellsville. The Limousin family lost Bob in June. He will always be remembered for his easy smile and ready handshake. RIP good friend, you were missed. The Wies’ were still ably represented as Euvonne was on hand, along with Wies manager, Heather Henderson.

In the Mini-Me, Father-Son Look-a-Like contest we had a four-way tie, with perennial contenders Memphis and Cade Peterson of South Dakota, joined by Rowdy and Jeff Berry of Washington, Cade and Jon Freed of Illinois, and Kevin and Charles Linhart of Leon, Iowa. We older guys spend a lot of our time looking in our programs to see what kid is wearing what number. We thank these four families for allowing us to know right off the bat what family is represented in the ring. 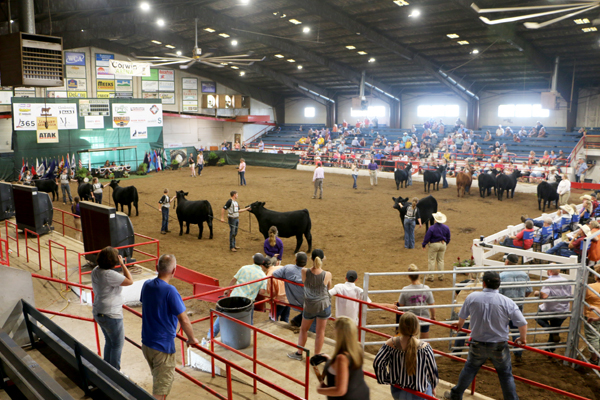 Tuesday’s show was “Riverstone Charmed” Day when it seemed like every other class winner was out of the former National Champion Female. The champion Lim-Flex Female also earned her own traveling shoes as John Crawford of Big Pool, Maryland, and TASF Forever Classy took home the top honor in a really tough Lim-Flex Show. Every class was deep with quality and the competition was tough but breath taking. Wednesday continued the limelight for females with the TASF prefix as Thomas-bred females took three of the top five heifer honors in the Owned Limousin Show. Congrats to Thomas & Sons for a great showing of TASF genetics throughout the entire week. Congrats also to West Texas Lawrence Family Limousin as they needed another trailer to haul home banners gathered by the Parkinson, Barton and Begert families. 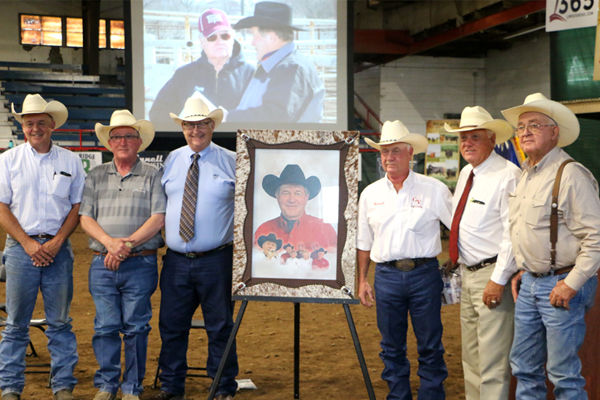 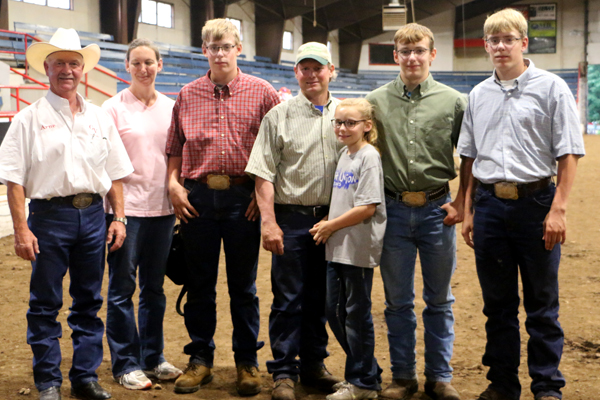 Wednesday evening the Juniors recognized Gene Raymond and GV Limousin as the Honorary Junior Member on the same night the breed recognized Gene with its highest honor, as it posthumously inducted him into the Limousin Hall of Fame. Son-in-law and GV manager, Arne Hansen was on hand to accept the portrait unveiling and help with the presentation from the Heartland Limousin Association of the first-ever GV Limousin Leadership Award to the Long triplets of Afton , Iowa. The sons of William and Sarah Long, Riley, Peyton and Emmet, were recognized for their desire to help when needed and their constant quiet leadership and work ethic around Heartland Limousin events.

Pinegar Limousin, from the host city Springfield, consigned one of the top lots in Wednesday’s Sale of Sales. Lot 1, a heifer pregnancy sired by Colburn Primo and out of AUTO Fedora, sold for $7,500 to Broken Y Limousin of Waynesville North Carolina. Big props to Ed Pinegar and the crew from Pinegar Limousin for all they did to make everyone feel at home in Springfield. The whole week was a testament to their continued commitment. Lawrence Family Limousin also held top-selling honors as Lot 3 sold for $7,500 to Red Rock Limousin, Cecil Osborn of Gary Texas. This was also a heifer pregnancy sired by MAGS Aviator and out of Alma Jo DHVO 723R. The top-selling embryos was a set of three consigned by Linhart Limousin of Leon, Iowa. The Wilder Family of Snook, Texas, gave $1,500 each for three embryos sired by MAGS Cable and out of LLJB Absolute Style.

To round out the shows was the All-American Limousin Futurity which saw its debut in Springfield in 1985. As a testament to the youth of our breed, the female division champions were all campaigned by junior female exhibitors. Sage Hanrahan of Okarche, Oklahoma, won the champion female banner and supreme title, which seemed fitting that a heifer raised in the legendary Bob Wies program won this year’s Futurity title. You can be sure he was smiling down and beaming with pride. A junior female exhibitor also led out the grand champion bull, congratulations to Alexa Montagne of Elk Point, South Dakota. It’s safe to say, based on the quality of the character of our junior members, the Limousin breed will have strong leadership for years to come.

Once the last animals were shown, everyone gathered in the arena to see who took home the coveted satellite event titles and watch the week’s wrap-up video, which always serves as reminder of just how much hard work and sacrifice goes into the week long event that is Junior Nationals.

As we thank the great Show-Me State for their home run hospitality, and we look forward to 2020 in Cajun Country, we would like to second the closing comments of Wednesday Judge Tim Fitzgerald. “Awesome Kids, Awesome Cattle, Awesome Breed.” 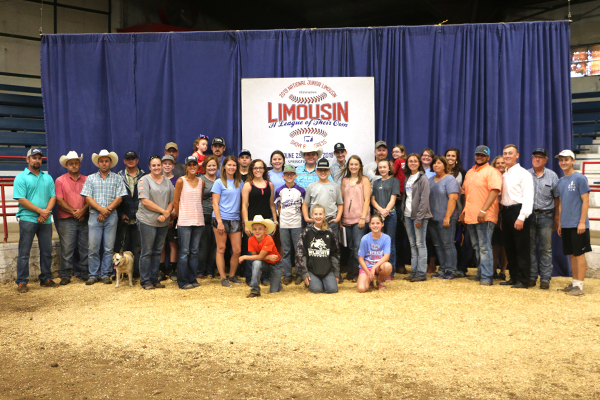