Riding Shotgun – Once Upon A Time 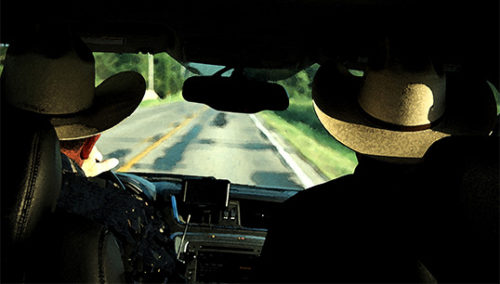 As we travel the highways and by-ways of the Limousin family and breed we often cuss and discuss the cattle business, sports, politics, great cheeseburgers and most of the time, the promotion and marketing of Limousin cattle.

Through “Riding Shotgun” we invite you to join us in the right-hand seat, so that we can let you in on what we find to be our marketing pet peeves, shortcuts and some of the favorite habits of top-flight professional producers. Grab a cup of coffee and take the ‘shotgun seat’—we are pleased to have you riding along.

In January of 1977, myself and college friends, Jay Purchase and Mike Shrewsbury, borrowed Shrew’s parent’s car and headed to Denver for the National Western Stock Show. I know the climate has changed, but we encountered the same weather we have today as we found ourselves in a blizzard outside of Salina, Kansas, and as the last car through the blockade, we promised the Kansas Highway Patrol we would faithfully follow the semi in front of us and for about 10 hours we did. Arriving in Denver half a day late, we put on our Stock Show clothes and released ourselves on the Greatest Livestock Show of all time.

By the time Jay and I had finished our trip, we had decided the world needed more “Livestock Field Editors” and a path to that end was planned. Another visit in 1978 led to my first job in 1979 with the Record Stockman. In January of that year I spent 15 days training, learning to wear a tie and a cowboy hat, how to know when the bid was in my section, what my money was and what to do when I had three guys and they all thought they had the bid. I also learned how to write a sale report (Thanks Bill Angell), load a camera (Thanks Andy Rest) and celebrate a successful sale (Thanks JC Barr, Doug Paul and Jay Purchase). When Stock Show was canceled in 2021 by the dreaded Covid, it was the first Denver I had missed since 1977. By a casual count of my 44 saved datebooks, that is roughly 375 days on the bricks of the National Western, one year of my life, and a good year it has been.

Through the years I have been lucky to work with the best Colonels in the livestock industry. Men like Jim Baldridge, Pat Goggins, Stanley Stout, Eddie Sims, Jim Birdwell, Kenny Trout and many more too numerous to list. These guys let me know if my man was out and which of the three men in my section was actually in, sometimes politely, sometimes more pointed than that. In 1981, I was lucky enough to be offered a job with Bob Crook and the Limousin World and spent the next 40 years working with two of the best to ever rap a gavel, C.K. Sonny Booth” and Bruce Brooks. I hope the Limousin breed knows how lucky they are to have had two talented, honorable and fun gentlemen that believe in and sell your product. I don’t know how many miles I have traveled with these two friends, but I know it has never been boring and sometimes it has been downright exciting. As time has gone on it has been my privilege and pleasure to watch Ronn Cunningham and Chisum Peterson join the breed and I can tell you that the Limousin breed is in good shape for years to come with a pair of the top young auctioneers in the seedstock business.

Sale managers like Ken Holloway, Keith Kissee, Randy Ratliff and Kiley McKinna have been the lifeblood of Limousin marketing and the kindness and trust each have shown me will long be appreciated. The time away from their families will never be repaid and I hope we all appreciate the sacrifices they have made to promote the Limousin breed. The North American Limousin Foundation has been there through it all and they and their employees also deserve a pat on the back for the time and professional dedication they exhibit on behalf of Limousin breeders. One thing I am very proud of, is that I think I am one of the few that has been a breeder, Limousin World representative, NALF Employee, National Board Member and National Board President. It took 44 years, but as Baxter Black told me once, what’s time to a ringman.

One of the best side effects of the past 44 years ringside has been the lifelong friends and professionals whose names will always be in my datebook. Guys like Dan Wedman, Andy Rest, DeRon Heldermon and Thad Combs have represented the Limousin breed proudly and professionally. The heart of the industry, while I have been lucky enough to travel it, are friends like Tom Rooney, Doug Paul, Jay Purchase, Delvin Heldermon, Kirby Goettsch, Terry Robinson, Alan Sears, Jim Gies, Bruce Bradley, Scott Manley, Tim Lackey, John Meentz, Phil Stoll, Ralph Means, Chisum Kinder, Joel Edge and Don Birk. Working back-to-back with these men has been a pleasure and made the whole thing a little easier. Knowing they always had my back and were willing to bail me out of any jam was a comfort few get to experience.

Most importantly has been you, the breeders. I so appreciate your trust and backing through the years. One of the things I took the most pride in was buying cattle on order for those who couldn’t attend a sale for one reason or another. I don’t know how many cattle I have purchased for others through the years, but I know I appreciated your trust and your interest whether we were successful, ran a strong second, or a distant third. I also want to thank everyone that has hired me to represent them at ringside. I wish I could tell you how many Limousin animals I have helped sell. Let’s just say it has been several, all hopefully handled in a professional manner meant to best represent you and your product while getting the most money collected for you and your family. I am also proud of the fact that for some, I have worked all your sales—some more than 30 years and for a few, 40 or more.

I have watched sons and daughters take over for their parents and know the Limousin breed is stronger than it has ever been, both genetically and with strong breeder involvement. As you can probably see, all of this has led to a time for a change in business plans. With more expensive travel and the desire to spend more time with the only one who ever wanted to have a fulltime seat riding shotgun, we have decided to take down our “bid spotter” shingle and retire our Hampton Inn Diamond Status and devote more time to Grassroots Genetics & Consulting and Semen Business and to Grassroots Insurance and our partnership with Liberty Mutual. We plan to be every bit as involved in the Limousin breed, helping with matings, soliciting the best bulls and making sure you have an avenue to purchase frozen genetics from a longtime reputable dealer and sales team. We will also be able to insure your purchases and mitigate the risk that comes with owing quality seedstock cattle.

If you’ve ever ridden shotgun with me, you know that George Strait is always on play. I’m reminded of one of my many George favorites.

We still may show up at your gate from time-to-time, but we’ll probably be carrying our fishing rods, our shotguns or our golf clubs. Also, when you call, don’t be surprised if it sounds sunny. Because you see, I really hate blizzards and don’t plan on driving in one again. The road has been a long one, but a great one. We hope to meet you out there soon.