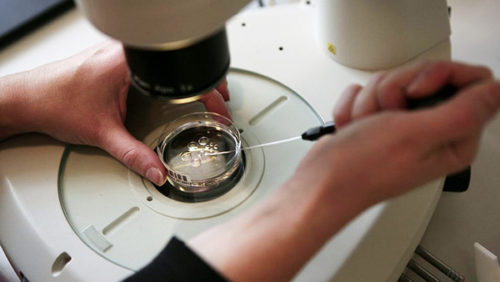 Scientists at the University of Kent in the U.K. have successfully applied a new way to screen the genetics of cattle embryos based on technology originally developed for human in vitro fertilization (IVF).

The approach, called Karyomapping, was originally designed to detect and screen for single gene and chromosome disorders simultaneously in human embryos produced through IVF. Now, the application of the same technique to cattle IVF—involving screening at the embryo stage rather than when a calf is born—will allow decisions to be made earlier on the best-quality genetic stock, the university announced.

The latest research, led by professor Darren Griffin of the University of Kent’s School of Biosciences, should allow better-quality genetics to be introduced into the breeding herd more rapidly, the announcement said. Moving genetically screened embryos, rather than live animals, around the world is also more biosecure and environmentally friendly and means they can be delivered to breeding farms in a more efficient manner, the university said.

“In vitro-produced embryos are used widely in the cattle breeding industry, but this is the first time they have undergone a whole genomic screen beforehand. We have used Karyomapping to screen for genetic merit as well as the incidence of chromosome disorders, which could significantly reduce the chances of the embryos developing into live-born calves,” Griffin said.

The researchers reported on success of the technique, including the first calf born following Karyomapping on a farm near Penrith, U.K.

The study, “Karyomapping for Simultaneous Genomic Evaluation & Aneuploidy Screening of Preimplantation Bovine Embryos: The First Live-born Calves ,” also involved Drs. Kara Turner and Giuseppe Silvestri at the University of Kent, working in collaboration with a team from the University of Nottingham and the Paragon Veterinary group in Cumbria.