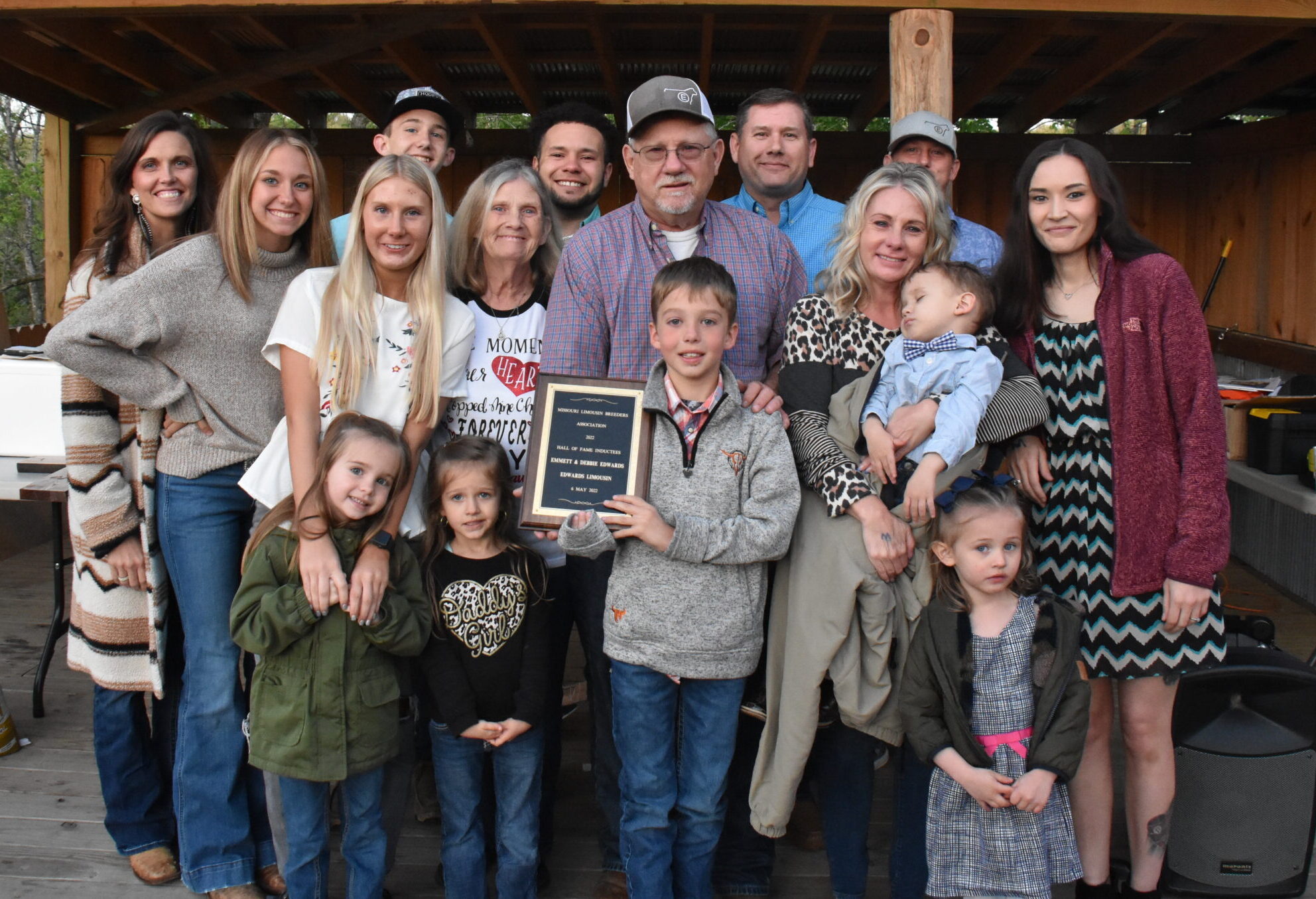 Emmett and Debbie Edwards were inducted into the Missouri Limousin Breeders Association (MLBA) “Hall of Fame”. The ceremony took place during the MLBA annual banquet, meeting and benefit auction at the Sand Springs Resort near Lebanon.

They grew up in the western rural Missouri community of Corrder-Higginsville. Emmett served in the Missouri National Guard for 34 years, rising to the rank of Command Sargent Major of the 35th Division Support Command (DISCOM), while Debbie worked at Central Bank until her retirement. This past April, Emmett and Debbie celebrated their 51st wedding anniversary.

The Edwards family raised feeder pigs and began in the cattle business in 1988 with Simmental. In 1998 they bought their first Limousin steer from Bobby and Jo Rankin at the state MLBA Limousin sale. Emmett was impressed with their growth and muscling, and that was the beginning of their Limousin seedstock operation.

They raised two sons, Shaun and Scott, and two daughters, Cindy and the late Stacia, and they now also have 11 grandchildren. The entire Edwards family have been extremely active developing Limousin and Lim-Flex genetics, competing with their cattle in local, state, regional and national Limousin shows. They are die-hard Limousin cattle breeders in all facets of the industry including farm work, genetics, marketing, advertising, presentation, customer relations, promotion, and backing up of their product. They have conducted Limousin production sales at their farm, and they currently hold an online sale to market some of their premier breeding stock.

Emmett and Debbie are always willing the pitch in and help wherever they are needed. Emmett has worked as a ring man or gate man during cattle shows, helping things run smoothly, and Debbie is always ready to help prepare and/or serve meals at the shows. They faithfully attend Limousin shows, sales, and auctions as consignors and/or bidders. Their enduring support by attending their children and grandchildren’s shows is to be emulated by others. Emmett is currently in his second term on the Heartland Limousin Association board of directors, serving as vice president. He is active on the Executive Committee and is sought out for his wisdom and advice.

Their son, Lieutenant Colonel Shaun Edwards, is currently serving overseas in the 35th Infantry Division and was not able to attend the induction ceremony. He sent a telegram in support of his parents and it was read as part of the ceremony. He ended his message with the following statement, “I know how fondly you hold the experiences, memories, and friendships this adventure in the Limousin breed has brought you. The entire family is extremely proud of you and what you have accomplished”.