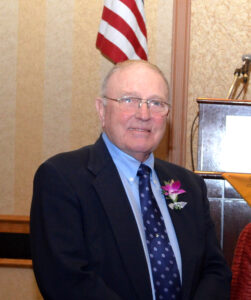 Herman Symens, 82, of Sisseton, South Dakota, passed away July 16, 2022, after a long illness. He was a pioneer in the Limousin breed and a true friend of Limousin breeders, spending four decades breeding, feeding and promoting the cattle he loved.

He started with Limousin in 1970 when he and his brothers, Irwin, Paul and John, began raising this new breed of cattle, Limousin, at Symens Brothers near Amherst, South Dakota. They were leaders in Limousin genetics, exhibiting many grand champion Limousin bulls at shows like the National Western Stock Show, Black Hills Stock Show and the South Dakota State Fair.

Herman, his wife, Judy, and their sons moved from Amherst to Sisseton, South Dakota, in 1993 where they raised cattle at Symens Hills Ranch. They also owned and operated LIMI-Gene, Inc., a semen distribution company created in 1989 with the vision of providing the Limousin breed with a source of quality genetics.

This great cattleman was not only actively involved raising Limousin cattle, but he also played a major role in the growth, development and acceptance of the breed. He served on the North American Limousin Foundation (NALF) Board of Directors from 1978 to 1984, serving as president of the association for two years in 1983 and 1984. He was held in high esteem by nearly all the seedstock producers of the Limousin breed. He was also a founding member and on the Board of Directors of the Heartland Limousin Association for many years. Herman was on the South Dakota Limousin Board of Directors, serving as president for several years. He judged many national junior and open shows in the United States and Canada.

He was a great supporter of all breeders, both young and old. He traveled across the country as well as internationally, buying and selling cattle as well as exhibiting at many prestigious shows. Breeders sought out Herman for his opinion and advice on Limousin cattle. Mark Anderson, NALF Executive Director, said at his “Hall of Fame” induction, “Herman is considered a true friend of Limousin breeders, and he is a committed promoter of the breed. He has had a love of the breed and the people for more than 40 years, and he is passionate about the attributes of Limousin cattle.”

Herman has received many honors over the years. In 2015, he was inducted into the North American Limousin Foundation “Hall of Fame”, becoming the fifth Limousin breeder/promoter to achieve that high honor. At his induction ceremony, several Limousin producers from South Dakota, Minnesota and North Dakota spoke to his true dedication to agriculture and the Limousin breed. Dean Summerbell, Executive Secretary of the Heartland Limousin Association, said he thought Herman Symens forgot more about Limousin cattle than most producers will ever know.

In 2019 Herman retired due to ill health, and he and Judy moved from the ranch into Sisseton.

We will all miss Herman Symens, a true Legend in the Limousin breed!

Arrangements by Cahill Funeral Home in Sisseton, South Dakota, are pending, and further information will be posted as they become available.