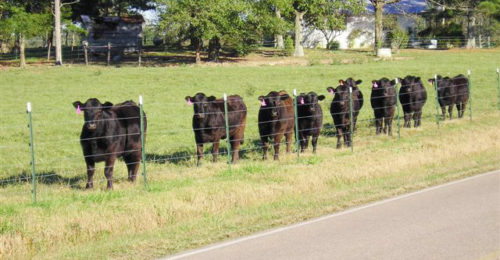 As the bulls are being removed from the replacement heifers, this would be an ideal time to call and make arrangements with your local veterinarian to have those heifers evaluated for pregnancy in about 60 days.

As the bulls are being removed from the replacement heifers, this would be an ideal time to call and make arrangements with your local veterinarian to have those heifers evaluated for pregnancy in about 60 days. In two months, experienced palpaters should have no difficulty identifying which heifers are pregnant and which heifers are not pregnant (open). Those heifers that are determined to be open after this breeding season, should be strong candidates for culling. Culling these heifers immediately after pregnancy checking serves three very economically valuable purposes.

1) Identifying and culling open heifers early will remove sub-fertile females from the herd. Lifetime cow studies from Montana indicated that properly developed heifers that were exposed to fertile bulls, but did not become pregnant were often sub-fertile compared to the heifers that did conceive. In fact, when the heifers that failed to breed in the first breeding season were followed throughout their lifetimes, they averaged a 55% yearly calf crop. Despite the fact that reproduction is not a highly heritable trait, it also makes sense to remove this genetic material from the herd so as to not proliferate females that are difficult to get bred.

2) Culling open heifers early will reduce summer forage and winter costs. If the rancher waits until next spring to find out which heifers do not calve, the pasture use and winter feed expense will still be lost and there will be no calf to eventually help pay the bills. This is money that can better be spent in properly feeding cows that are pregnant and will be producing a salable product the following fall.

3) Identifying the open heifers shortly after (60 days) the breeding season is over will allow for marketing the heifers while still young enough to go to a feedlot and be fed for the choice beef market. “B” maturity carcasses (those estimated to be 30 months of age or older) are very unlikely to be graded Choice and cannot be graded Select. As a result, the heifers that are close to two years of age will suffer a price discount. If we wait until next spring to identify which two year-olds did not get bred, then we will be culling a female that will be marketed at a noticeable discount compared to the price/pound that she would have brought this summer as a much younger animal.

Certainly the percentage of open heifers will vary from ranch to ranch. Do not be concerned, if after a good heifer development program and adequate breeding season, that you find that 10% of the heifers still are not bred. Resist the temptation to keep these open heifers and “roll them over” to a fall-calving herd. These are the very heifers you want to identify early and remove from the herd. It makes good economic business sense to identify and cull non-pregnant replacement heifers as soon as possible.